Two unusual things happened. I was riding a ski lift. And my lift companion, a kid, said something that will stay with me for a long time.

Despite growing up in Sweden, I never learned how to ski until last winter. While it may sound strange, skiing has a symbolic meaning to me. Growing up, I felt different. I was different: a Chinese immigrant speaking English, attending a Swedish school in an affluent neighborhood. Every winter, my classmates went skiing while I stayed home. And so, skiing came to represent the lack of belonging I experienced.

As an adult, I’ve made a conscious effort to experience the things I missed. Picking up skiing as a hobby is a part of that. After a heavy snowfall in November, I traveled to a ski resort called Åre.

Due to strong winds, the chairlift I intended to ride was non-operational. I headed towards a different area. Here, they operated a T-bar, a type of lift I hadn’t used before. 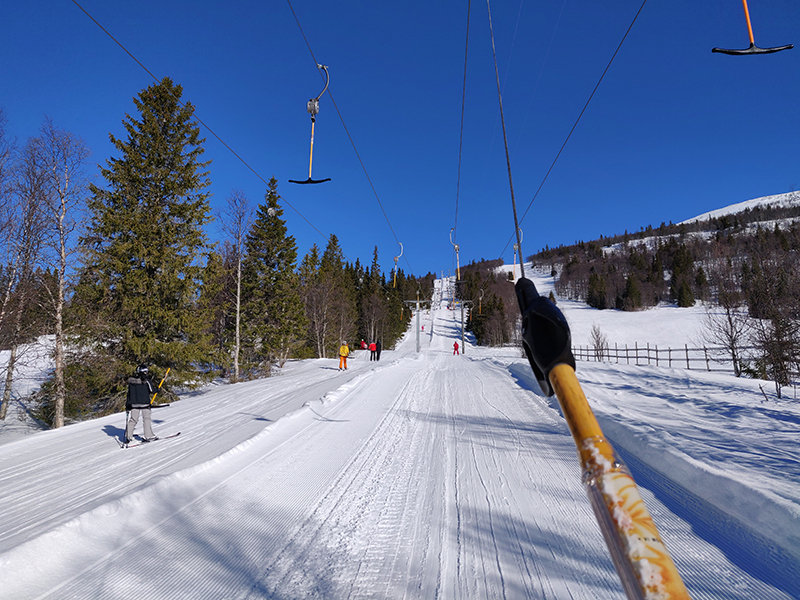 A T-Bar lift in Åre.

That day, I learned that T-bars work best if you ride with someone of similar height. You’re supposed to place the bar underneath your butt and lean against it, as it pushes you up the hill. But when riding with a kid, the bar ends up knee-level, and you’ll be in for an uncomfortable ride.

I also learned how inviting these lifts are to conversations. For five minutes, you stand side-by-side with a stranger. Peaceful nature surrounds you, and it’s impractical to fiddle with your phone.

Day two, while queuing, I realize a little girl will be my next lift companion. Judging by her appearance, she hasn’t turned ten yet. We receive a helping hand from the lift operator, as we lean on the T-bar. Knee-level for me, right level for her. As the bar pushes us forward, she turns and looks at me.

I’m astonished. For one, I rarely encounter kids on lifts who interact. And perhaps it’s due to my lack of experience with them in general, but the degree of thoughtfulness she showed with just a few words surprised me. Plus, the fluency in which she spoke English, reminded me of myself as a child.

Continuing up the hill, I find out she’s here to attend a training camp. Realizing I speak Swedish, she tells me she spoke English at first as international tourists frequent the resort.

As we part ways, I tell her, “I like that you asked. That was very considerate of you!”.

But most of all, I kept thinking about that interaction. It resonated with me — we need to remind ourselves to be considerate. In many instances, it’s something that doesn’t require much. It’s the little things, as we say.

I’ll be skiing more this winter. I want to get better. Someday, when I have kids, I’ll teach them how to ski so they won’t feel as different growing up. And as they grow up, I hope I’ll be able to raise them as well as the parents of this girl have.